We transfer ideas from Riemannian geometry to this setting, letting the distance between two points be the shortest path on a Riemannian manifold induced by the transformation. The method yields a principled distance measure, provides a tool for visual inspection of deep generative models, and an alternative to linear interpolation in latent space.

A Riemannian space is a differentiable manifold \(M\) with an additional metric to describe its geometric properties. This enables assigning an inner product in the tangent space at each point \(\mathbf{z}\) in the latent space through the corresponding metric tensor \(\mathbf{G} \in \mathbb{R}^{N_z \times N_z}\), i.e.,

Treating the latent space of a VAE as a Riemannian manifold allows us to compute the observation space distance of latent variables. Assuming we have a trajectory \(\gamma:[0, 1]\rightarrow\mathbb{R}^{N_{z}}\) in the Riemannian (latent) space that is transformed by a continuous function \(f(\gamma(t))\) (decoder) to an \(N_{x}\)-dimensional Euclidean (observation) space. The length of this trajectory in the observation space, referred to as the Riemannian distance, is defined by

The metric tensor is defined as \(\mathbf{G}=\mathbf{J}^{T}\mathbf{J}\), with \(\mathbf{J}\) as the Jacobian of the decoder. The trajectory which minimises the Riemannian distance \(L(\gamma)\) is referred to as the shortest path geodesic. We integrate the metric tensor with \(n\) equidistantly spaced sampling points along \(\gamma\) to approximate the distance, i.e.,

We use the magnification factor (MF) to show the sensitivity of the generative models in 2D latent space and evaluate the approximated geodesic. The \(\text{MF}(\mathbf{z})\equiv \sqrt{\det\mathbf{G}(\mathbf{z})}\) can be interpreted as the scaling factor when moving from the Riemannian (latent) to the Euclidean (observation) space, due to the change of variables.

With the start and end points of the curve in the latent space given as \(\mathbf{z}_0\) and \(\mathbf{z}_1\), we consider the following constrained optimisation problem:

There is an example of showing the difference between the geodesic and Euclidean interpolant using CMU human motion dataset:

There are several challenges of the NN-based or similar (e.g., ODE) approaches:

To bypass these hurdles we introduce a graph-based approach Chen et al. (2019), where a discrete and finite graph is built in the latent space using a binary tree data structure, a k-d tree, with edge weights based on Riemannian distances. Once the graph has been built, geodesics can be approximated by applying a classic search algorithm, \(\mathrm{A}^\star\).

The graph is structured as a k-d tree, a special case of binary space partitioning trees, where each leaf node corresponds to a k-dimensional vector. The nodes of the graph are obtained by encoding the observable data \(\mathbf{X} = \{ \mathbf{x}^{(1)},\dots,\mathbf{x}^{(N)} \}\) into their latent representations \(\mathbf{z}^{(i)}\). This is done by using the respective mean values of the approximate posterior \(q_{\phi}(\mathbf{z}^{(i)}|\mathbf{x}^{(i)})\). Each node is connected by an undirected edge to its k-nearest neighbours. The edge weights are set to Riemannian distances \(L(\gamma)\), where \(\gamma\) is the straight line between the related pair of nodes.

A classic graph-traversing method to obtain the shortest path between nodes is \(\mathrm{A}^\star\) search. It is an iterative algorithm that, given a graph \(\mathcal{G}\), maintains a sorted list of nodes that can be visited in the current state. The list is typically initialised with the starting node and is being sorted according to the estimated cost of including node \(n\) into the optimal path. The estimated cost is computed by \(f(n) = g(n) + h(n),\) where \(g(n)\) is the cost of the path from the starting node \(n_\mathrm{start}\) to \(n\) and \(h(n)\) is a heuristic function that estimates the remaining cost from \(n\) to the target node \(n_\mathrm{target}\).

There is an example of showing the difference between the geodesic and Euclidean interpolant using the chair dataset: 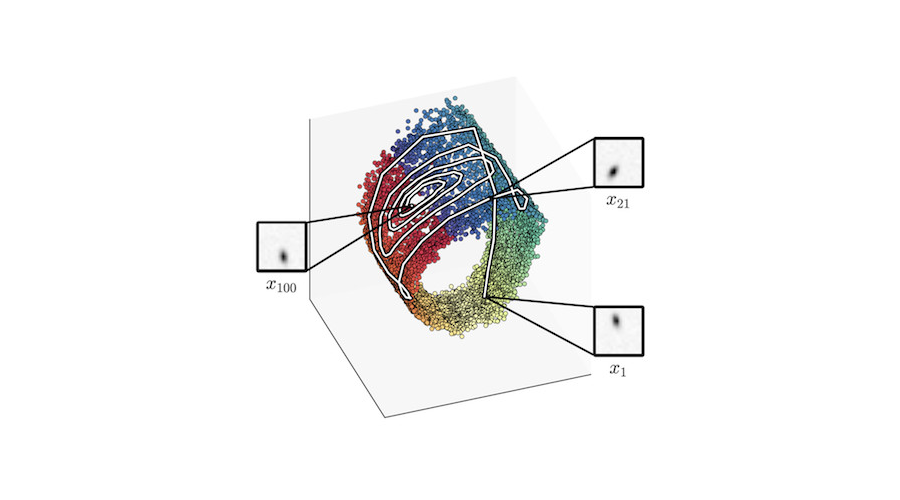